On the morning of November 16, 1989, an elite battalion of the Salvadoran Army entered the grounds of the Jesuit University of Central America, with orders to kill Father Ignacio Ellacuría—an outspoken critic of the Salvadoran military dictatorship—and leave no witnesses.

When it was all over, the soldiers had killed six Jesuit priests, a housekeeper and her 16 year old daughter in cold blood.  The Jesuits Massacre is one of most notorious crimes of El Salvador’s 12-year civil war, which left over 75,000 people dead including most famously Archbishop (now Saint) Oscar Romero. 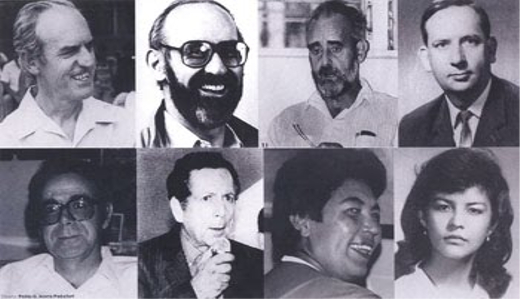 A PRAYER FOR TODAY

we celebrate the witness of your martyrs

for faith, for peace, and for justice.

Have mercy on the souls of these departed ones and grant them peace.

and guide us to speak your truth to those in power.

Give us the courage to raise our voices for those who suffer oppression and violence.

Grant us your joy as we work to bring your kingdom to this world. Amen.